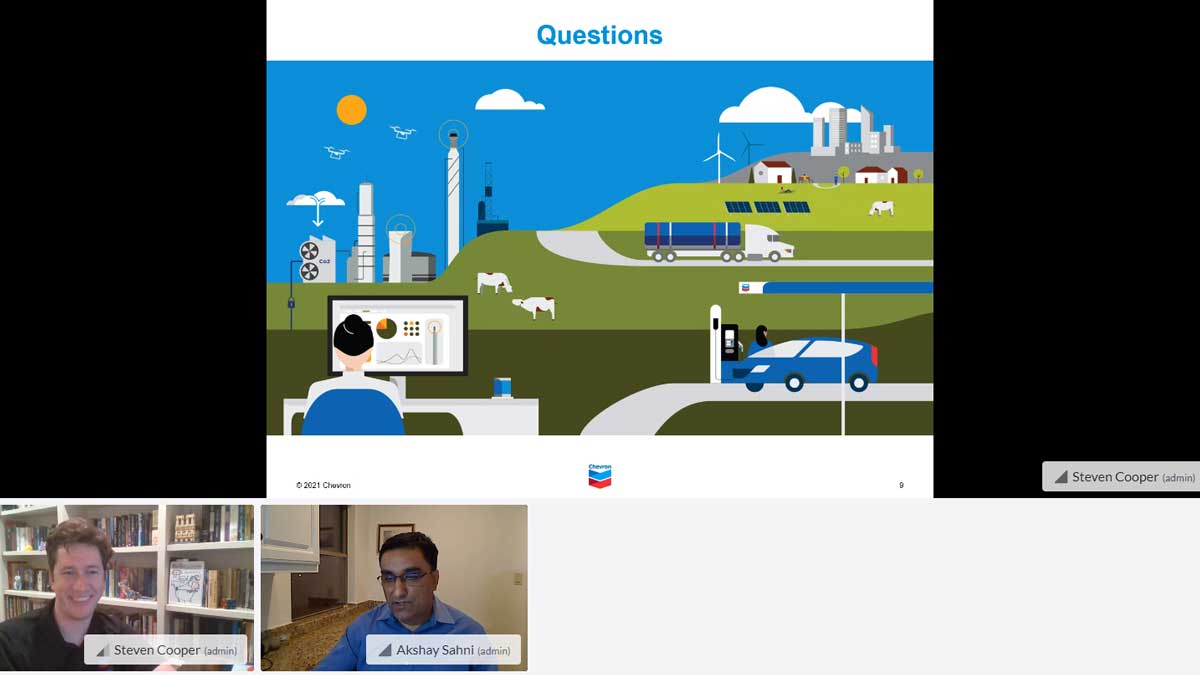 The highlights of Akshay’s talk, entitled “Corporate-academia partnership for driving innovation in Energy”, included emphasizing the importance of partnerships with different organizations, the Paris Climate Agreement, and ways to reduce carbon footprint with renewable energy.

Throughout his extensive career, Sahni has authored over 20 publications and holds 3 patents. He joined Chevron in 1998 as a research scientist and served in various engineering and management positions. In his current position, he provides oversight over enterprise Technology Strategy Development, External Partnerships for Technology Innovation, Intellectual Property, and Technology Deployment and Adoption.

During the lecture, Sahni described an electrified future for which Chevron is working with a vision of "more with less." As energy is needed for the growing economy, it is important for the energy transition to finally achieve the mission set in the Paris agreement.

He further added that Chevron has already stored 4 million tonnes of CO2 and has been increasing renewables and offsets in their own business by also establishing renewable power such as solar and wind in various parts of the world.

Sahni spoke of partnerships being the pillars of innovation and technology. Partnering with government agencies, universities, startups or national laboratories helps in fostering diverse ideas.

Rice’s own CarbonHub has been successful in bringing lab research to a commercial scale with out-of-the-box thinking. In California, Chevron has collaborated with Schlumberger and Microsoft to promote ‘negative power’ by converting agricultural biomass into a renewable synthesis gas that mixes with water and oxygen to generate electricity.

Sahni further emphasized the importance of the production of green hydrogen, since this alone can reduce 50% of the greenhouse gases currently produced. This means moving from producing hydrogen from natural gas by the method of steam methane reforming to producing hydrogen by the electrolysis of water, where the electricity used in the process was generated via a renewable source.

He ended the presentation with the four D’s of energy transition: Decarbonization, Decentralization, Digitalization, and Dematerialization. He then opened the floor for a question-answer session, moderated by ChBE Alumnus and Chevron employee Steven Cooper.

The event was a success with nearly 100 attendees. Sahni encouraged students to put forward their ideas and help us to move forward in reducing the carbon footprint.

The annual Chevron lecture was established in 2013 to propagate various aspects of science and technology in energy. Following Covid-19 pandemic protocol, this year’s event was conducted on a virtual platform Gatherly. This platform allows “impromptu” virtual networking in small groups as well as an avenue for the evening’s talk to be broadcast to the whole audience. Thus, the basic format of this event, networking and a large lecture, was retained.

The Department of Chemical and Biomolecular Engineering at Rice hosts the lecture each year with the help of the Rice AIChE student chapter, the CHBE Graduate student association, the CHBE Alumni Advisory Committee, and department staff with generous sponsorship by Chevron.